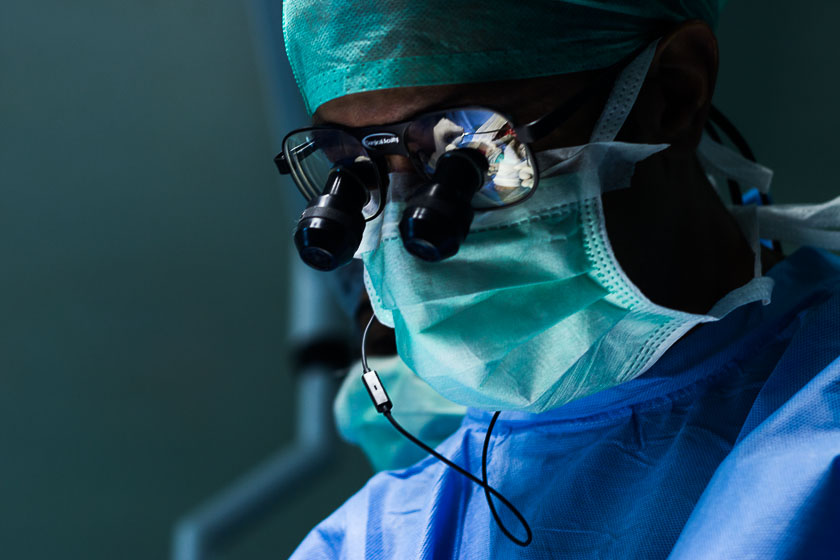 The pituitary gland is a small but vital part of the body. About the size of a pea, it sits at the base of the brain, off the hypothalamus, in a bony cavity called the sella turcica. It also happens to be just behind the bridge of the nose in close proximity to the optic nerves. It produces hormones that regulate various organs and glands, making it critical to the functioning of the body. It controls the thyroid, adrenal glands, overies, testicles and so on and hence is also known as the ‘master gland.’

TUMOURS OF THE PITUITARY GLAND AND SKULL BASE

Pituitary tumors are among the most common intracranial tumours occuring in a variety of sizes from small, hormonally-active microadenomas to the larger, non-secretory macroadenomas. Most of them (more than 90%) are benign tumours which are slow growing. About 5 to 10% are a little more aggressive and less than 1% are malignant pituitary carcinomas.

As the numbers indicate, a lot of these tumours are small and don’t have any noticeable symptoms, thereby leaving normal life largely unaffected. In fact, nearly 20% of people have pituitary tumours but many go through their whole lives without having them diagnosed. Those which do grow though can have serious effects considering the critical nature of the pituitary’s functions.

They require surgery without delay!

Traditionally, surgery to this part of the brain and to the base of the skull was extremely challenging. Accessing the tumours because of the location was so difficult that success rates were very low. All that has changed thanks to modern technology and medicine and today surgeons enjoy a very high degree of success in treating pituitary tumours through the endoscopic endonasal approach. In fact, today most such tumours are accessed and excised using this approach. 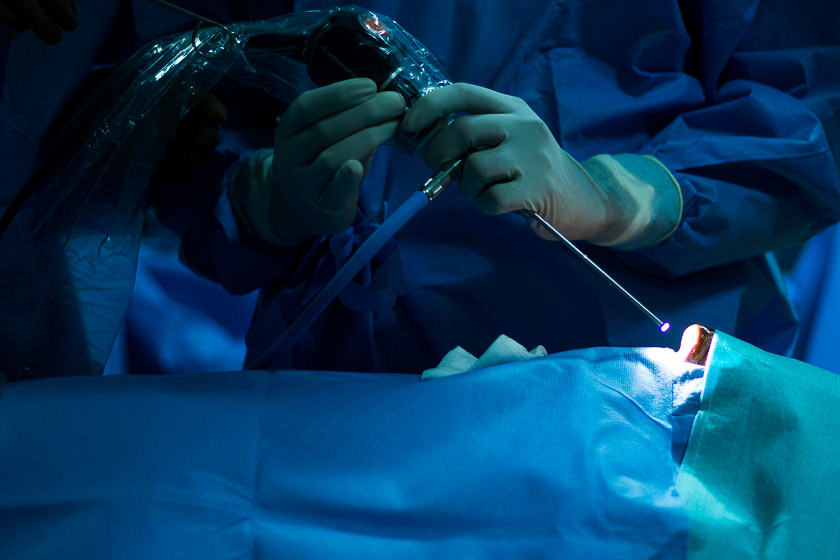 Acromegaly occurs when high levels of growth hormone make bone and soft tissue grow excessively. It is usually caused by a tumour in the pituitary gland. Symptoms of acromegaly may include:

Complications can include the following

Also referred to as juvenile nasopharyngeal angiofibroma (JNA), angiofibroma is a benign (noncancerous) tumour of the nasal cavity. Adolescent boys are almost exclusively affected by this, typically between the ages of 10 and 19, though they may affect boys as young as 7. Although benign, it can act in a malignant fashion by eroding into the surrounding sinuses, orbit or cranial vault. Common symptoms of angiofibroma include:

Some patients can develop facial deformities or abnormalities like

Usually located in the skull, and rarely in the spinal cord, arachnoid cysts can grow to a large size due to the retention of cerebrospinal fluid. Three different membranes called ‘meninges’ comprise the protective covering enveloping the central nervous system. They are:

In extreme cases, cysts have been known to cause a change in the shape of the head or displace surrounding lobes of the brain.

Symptoms
Symptoms depend on the size and location of the cyst. Tiny cysts may cause no symptoms at all and can be discovered during an unrelated exam. Larger cysts may cause a number of neurologic symptoms such as

The preferred surgical treatment for certain arachnoid cysts of the skull base is the Endoscopic Endonasal Approach (EEA).

Chordomas are rare, slow-growing tumours which develop from the remnants of notochord (which precedes the spinal column during embryonic development). Chordomas account for just 1% of central nervous system cancers and are usually found in adults between 40 and 70. While chordomas can occur at any site along the axial skeleton, they are most often found at the base of the spine (sacrum), tailbone (coccyx) and base of the skull (clivus). Chordomas rarely spread (metastasize) but are aggressive locally., affecting adjacent organs, tissue and bone. Symptoms of chordomas may include back pain, numbness, headaches and problems with vision. Treatment for chordomas vary and can include surgery (via the Endoscopic Endonasal Approach), chemotherapy and radiation.

Cushing’s disease is a condition caused by chronic exposure to elevated levels of the hormone cortisol (hypercortisolism) due to a pituitary tumour.

Fungal infection of the sinuses might occur when fungal organisms are inhaled and deposited in nasal passageways and paranasal sinuses. This causes inflammation. The dark, moist environment of the sinuses is ideal for fungi to reproduce without light or food. Most fungal infections of the sinuses are non-invasive i.e. they won’t spread to surrounding tissue.

While symptoms are similar to a sinus infection (congestion, facial pain, swelling and discharge), patients may be severely ill.

A tumor of the protective linings of the brain and spinal cord (called meninges) is called a meningioma. While most meningiomas are benign, some can be malignant. Benign meningiomas grow slowly and usually don’t cause problems unless pressing on the brainstem or compressing structures like the optic and cranial nerves. Malignant meningiomas grow faster and often causing neurological problems and possible swelling in the brain. Symptoms may include:

Treatments for meningiomas vary depending on type and location.

Symptoms
Since the tumour grows within air-filled spaces, it may not exhibit symptoms until it is large enough to block passage of air or smell or vision. They include:

In advanced cases, infiltration of NPC into the spine can cause

The preferred surgical treatment for NPC is the Endoscopic Endonasal Approach ODONTOID PANNUS (Rheumatoid Pannus, Odontoid Synovial Cyst) Odontoid pannus is abnormal tissue that grows in the region of the odontoid process – a toothlike projection at the back of the second cervical vertebra which serves as the pivot for the turning of the head.

This membrane of granulated tissue forms most often as a result of rheumatoid arthritis, in which the condition is called a rheumatoid pannus. Odontoid pannus may also develop due to severe trauma to the neck at the second cervical vertebra.

A similar (although rarely diagnosed) condition which has similar symptoms and treatment is the odontoid synovial cyst.

Rheumatoid pannus
Rheumatoid arthritis (RA) is a progressive auto-immune disease that causes chronic inflammation of the joints. When it attacks, it usually begins in the synovium – a kind of tissue that lines the joint capsule. Cells in the synovium begin to grow and divide abnormally (synovitis) causing a thickening of the synovium resulting in an inflamed and swollen joint.

As it progresses, the synovium can grow larger and form an inflamed, granulated sheet of tissue called rheumatoid pannus. This tissue will spread from the synovial membrane, causing considerable destruction as it invades the subchondral bone.

Symptoms of cervical–spinal abnormalities develop in approximately 60% to 80% of patients with rheumatoid arthritis. When RA invades the cervical spine, the resulting extension of pannus into the spinal canal may compress the brain stem, spinal cord and vertebral arteries causing severe pain and disability.

Left untreated rheumatoid pannus can even result in sudden death.

Treatment
An instability of the joints results in progressive deformity. Generally, in order to stabilise the joints, cranio-cervical fusion is recommended.

If the patient suffers from compression of the spinal cord or brainstem, surgery to decompress them is recommended. In these cases, the Endoscopic Endonasal Approach is best.

Sometimes a tumour or bony structure may compress the optic nerve thereby affecting its performance. In the course of time, it can even lead to the ‘death’ of the optic nerve, a condition also called optic neuropathy. The most common symptom of this is a gradual loss of vision. Treatment for this would be decompression of the optic nerve using the Endoscopic Endonasal Approach (EEA).

This is a chronic condition wherein there is an inflammatory reaction in the orbital tissues surrounding the eyes, which behaves a lot like a brain tumour. Since it is not a tumour, it does not spread or invade adjacent or nearby tissue but, it can compress surrounding structures. Orbital inflammatory pseudotumors might resolve with steroid treatment or on their own.

Pituitary apoplexy occurs when a pituitary adenoma either spontaneously hemorrhages or grows in such a way as to compress and cut off its own blood supply, resulting in the death of tumour cells, bleeding and acute swelling. The haemorrhage or necrosis-induced swelling can compress the

Pituitary apoplexy is a medical emergency which can be fatal if left untreated. However, with treatment the prognosis is good.

The preferred surgical treatment for pituitary apoplexy is the Endoscopic Endonasal Approach to remove the tumor and decompress the area. Surgery is performed after medical stabilisation.

A Rathke cleft cyst is a rare type of cyst believed to originate from remnants of the Rathke pouch. During embryonic development, Rathke’s pouch forms as a depression in the roof of the mouth, eventually losing its connection to the pharynx and giving rise to the anterior pituitary gland. If instead of regressing the cleft persists and enlarges, it may form into a cyst. Most of these cysts are:

In some instances, continual accumulation of fluid may cause the cyst to grow. As it grows it places pressure on surrounding structures, including:

This pressure results in associated symptoms.