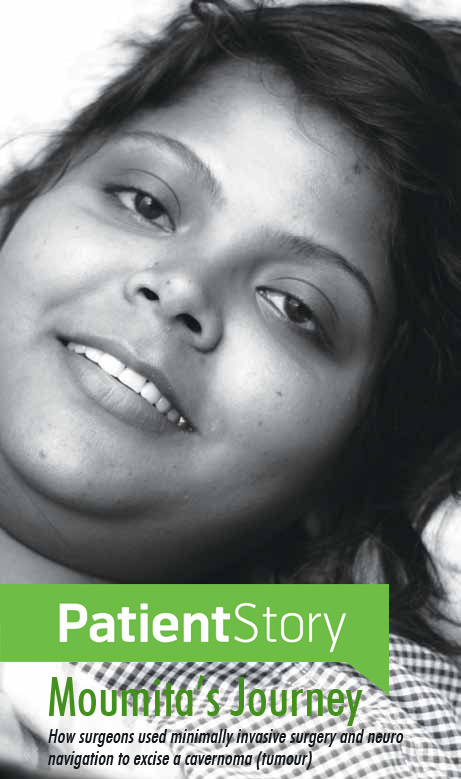 Moumita had a history of seizures for which she was put on medication.

An MRI was carried out and doctors found what is known as a ‘cavernoma’ on the right side of her brain, in the frontal lobe. A cavernoma is what is called a vascular malformation and comprises a ball of abnormal, thinwalled veins which spontaneously bleed. As the blood builds up around the cavernoma, iron deposits known as ‘hemosiderin’ do too causing irritation to the brain.

Now cavernomas can be extremely small making them notoriously tough to find during the course of surgery. So, the hospital elected to use the assistance of neuro navigation (as described in the previous article) for this procedure.

Then the big day in her life arrived – she got married. When she realized that her medication would not let her conceive, she stopped it. Naturally, the seizures returned.

By the evening she was walking and she was discharged in just 48 hours – remarkable considering she had just undergone brain surgery.

The only mark that she bore which indicated she had just been through such a complex procedure – was the loss of a small strip of her lovely hair. Something which she would regain in no time at all.

Apart from our crack team of surgeons and cutting-edge technology, there was one more ingredient that allowed us to make Moumita’s dream of having children possible – the generosity of many donors. You see, as a person of limited means, Moumita would probably have spent the rest of her life on medication.

But here at Sita Bhateja Speciality Hospital, our charitable wing was able to offer her a second lease on life and it is only made possible through the trust that many people repose in us.

We are delighted to inform these wonderful benefactors and our readers that Moumita is now deliriously happy as she is expecting her first child!