The month-end meant that Nagaraj was working long hours and life was at its stressful best. He left office at 8 p.m and climbed into his cab, feeling the pain of a headache. With the pain growing, he dropped off to sleep. He was woken by the ringing of his phone. On hearing of his headache, his wife Karthiyayini told him to pick up some Paracetamol. By the time he got home, the pain had growing tenfold. In a short while, the pain was blinding. Deeply concerned, Karthiyayini and his mother took him to a clinic nearby, where the doctor placated them and gave him some painkillers, saying there was nothing to worry about.

On their return home, Nagaraj threw up in the elevator and continued to do so for the next hour. They rushed him to the nearest hospital where the cause was assumed to be food poisoning. He was admitted and put on a drip. They ordered a CT scan which then showed a mass in the pituitary region of the brain. 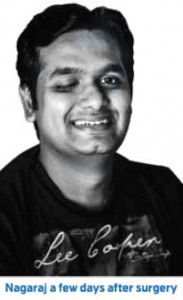 An MRI confirmed that he had an adenoma with apoplexy. By nightfall Nagaraj’s right eye closed – a sure sign of a medical emergency requiring immediate surgery. Being familiar with Sita Bhateja Speciality Hospital, Karthiyayini expedited the discharge procedures and they shifted Nagaraj at once.

As soon as he was brought in, surgeons knew that Nagaraj’s situation was grave. They decided the best course of action would be to approach the tumour using the Endonasal Endoscopic
Approach. Nagaraj was moved from emergency to the ICU at 9 a.m. By 2 p.m, Dr Arvind Bhateja (Head of the Dept of Neurosurgery and Spine Surgery) and Dr Vinay Rudrappa (ENT surgeon) and their teams were entering Nagaraj’s skull.

In the words of Dr Arvind Bhateja, “The tumour was pressing on the third nerve and part of it lay within the ‘cavernous sinus’ – the infamous neurosurgical ‘no-man’s land’ so named because of the very complex microanatomy of the area comprising multiple cranial nerves, large venous plexus, vital cerebral arteries . In a complex procedure we successfully excised the entire tumour. The patient responded well to the treatment. The patient experienced complete loss of vision when he came but thanks to our skilled team, we were able to completely reverse this and he is well on his way to recovery. Since the tumour was benign and we were successfully able to remove all of it.”

Within a couple of days, Nagaraj was sitting up and watching television out of the eye which was clinically blind just a few days before. The memory of his torrid experience already fading.

These days, tumours of the pituitary gland and skull base region, can be excised using an elegant new technique called the Endoscopic Endonasal Approach (EEA), also known as ‘transnasal endoscopic pituitary surgery’.

To do this, surgeons use a high-definition endoscope system – a tiny viewing instrument like a telescope with a high definition camera and a xenon light. Since its ‘eye’ is located closer to the target (the tumour) and it is viewing the region from the inside, it has a huge advantage over a microscope which has to look in from the outside. Other microsurgical instruments used to resect the tumour are also passed through the nasal passage along with accessory instruments that are required to streamline the procedure and make it safer (such as a micro doppler to identify major blood vessels). Using these microsurgical instruments, the surgeon can excise the whole tumour without any external incisions.

Why do the Transnasal Endoscopic Pituitary Surgery?

There are many benefits to this form of surgery as opposed to the traditional approach of having to open up the skull and cut through layers of tissue to reach it.

Since the surgeon is going through the nose, he doesn’t have to cut through healthy brain tissue, so the ever-present risk of harming any other vital part of the brain is avoided entirely. Since the entry is through the nose, there is no external incision, which means no scars at all. Recovery times are very quick with patients being discharged from hospital in as little as 48 hours. Most importantly, the results are nothing short of amazing. Here at Sita Bhateja Speciality Hospital, surgeons routinely perform this operation with a high degree of success.