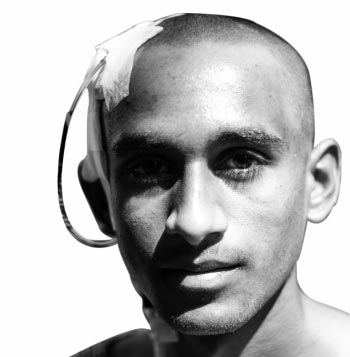 A young lad sits in a chair on the balcony enjoying the sunshine. He wears a hospital gown and a faraway look in his eye. Shaven-headed, he holds something on his lap. Then he turns and you notice the other side of his head. A tube protrudes from it and winds down to a plastic container which he holds delicately. This is Umesh – a nineteen-year-old boy hailing from a small village in Karnataka.

Umesh was spending a long weekend at his uncle’s home in Bangalore. At about 8 p.m on Sunday evening, Umesh slipped and fell. At the age of nineteen, this isn’t usually a cause for concern. Except that this was one of those unusual, unfortunate exceptions. Within 15 minutes of his fall, Umesh began vomiting violently. His uncle, Krishnappa, was telephoned immediately and informed and by then, Umesh had already started slipping into a coma.

As a driver who works at Baldwin Girls School, Krishnappa was well aware of a little hospital with an excellent reputation right next door – Sita Bhateja Speciality Hospital.

Waiving the paperwork and formalities that are the undoing of most emergency patients (in most institutions), Umesh was whisked off to the ICU and prepped for surgery.

By 9.45 p.m, less than two hours after his fall, surgeons were cutting into Umesh’s scalp to reach the blood clot. In 15 minutes, using a high speed drill, they cut a window into Umesh’s skull uncovered the blood clot and had it removed. Bleeding was controlled and the rest of the surgery proceeded uneventfully. The bone was neatly replaced and the opening closed.

Just a few hours after surgery, Umesh made a dramatic recovery and was awake and alert. By Monday morning he was standing up and walking around. After enjoying a nice wholesome breakfast, he moved to the balcony where he basked in the sunshine and contemplated what might have been, as his uncle looked on.

Krishnappa said that he knew the work of the hospital well and so he wasted no time at all. Their financial situation in no way impeded treatment and for that he is deeply thankful.

Post the treatment, it was determined that Umesh was a worthy candidate for assistance and that the charitable wing of the hospital would bear most of his expenses. Umesh has returned home and is well on his way to getting back to his studies.