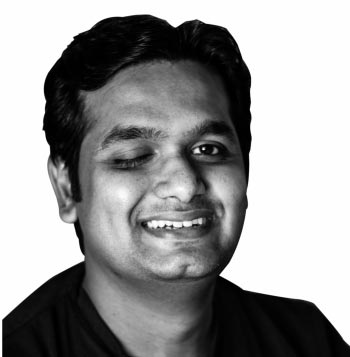 A smiling Nagaraj, just a couple of days after his procedure. Shortly after, his right eyelid opened as well and he was back to life as usual.

It was the 3rd of March. The month-end meant that Nagaraj was working long hours and life was at its stressful best. He left office at 8 p.m and climbed into his cab. He felt the unusual pain of a headache, something he was never prone to. With the pain growing, he dropped off the sleep in the cab. He was woken by the ringing of his phone. His wife Karthiyayini had called to scold him for not having left work. When he said he was in the cab, she was only somewhat mollified. On hearing of his headache, she told him to pick up some paracetamol on the way home.

By the time he got home, the pain had growing tenfold. His head was splitting and all he could bring himself to do was gulp down some tea before swallowing the tablet and lying down.

In a short while, the pain was blinding. He was rolling around in bed and screaming, unable to even bear the noise of voices. Deeply concerned, Karthiyayini and his mother took him to a clinic nearby. There, the doctor placated them and gave him some (stronger) painkillers, saying there was nothing to worry about. They returned home.

As he entered the elevator, Nagaraj threw up. By the time they had reached his floor he had thrown up again. In the next hour he continued to vomit. They then rushed him to the nearest hospital. In the emergency ward, they said it was probably food poisoning from some bad food he had eaten the previous night. He was admitted and put on a drip. By the next day, his condition had worsened. They ordered a CT scan which then showed a mass in the pituitary region of the brain. The general physician on call consulted the neurosurgeon who wanted an MRI to confirm. The MRI confirmed that he had an adenoma with apoplexy.

Now, he was told that he had a few months to make a decision about what would be a delicate surgery which required preparation.

By nightfall however, Nagaraj’s right eye closed. Alarmed at the development, they called Dr Satyaprakash, a trusted orthopaedic surgeon who had done the knee replacement surgery for Nagaraj’s mother, at Sita Bhateja Speciality Hospital. They were informed that the closing of the right eye meant it was an emergency and they needed to operate straight away. Karthiyayini expedited the discharge procedures and they whisked Nagaraj to Sita Bhateja Speciality Hospital.

As soon as he was brought in, Dr Arvind Bhateja (Head of the Dept of Neurosurgery and Spine Surgery and MD of Sita Bhateja Speciality Hospital) knew that Nagaraj’s situation was grave and that he needed immediate surgery. Using advanced modern microsurgical techniques, the ENT team and Neurosurgical team would work together to approach the tumour using the Transnasal Endonasal Approach.

Nagaraj was quickly moved from emergency to the ICU. That was at 9 a.m. By 2 p.m, Dr Bhateja and Dr Vinay Rudrappa (ENT surgeon) and their teams were entering skull through the endonasal approach.

In the words of Dr Arvind Bhateja, “The tumour was pressing on the third nerve and part of it lay within the ‘cavernous sinus’ – the infamous neurosurgical ‘no-man’s land’ so named because of the very complex microanatomy of the area comprising multiple cranial nerves, large venous plexus, vital cerebral arteries . In a complex procedure we successfully excised the entire tumour. The patient responded well to the treatment. The patient experienced complete loss of vision when he came but thanks to our skilled team, we were able to completely reverse this and he is well on his way to recovery. Since the tumour was benign and we were successfully able to remove all of it, Nagaraj can look forward to a full and healthy life.”

On the 10th of March, Nagaraj was sitting up and watching television out of the eye which was clinically blind just a few days before. The memory of his torrid experience already fading.