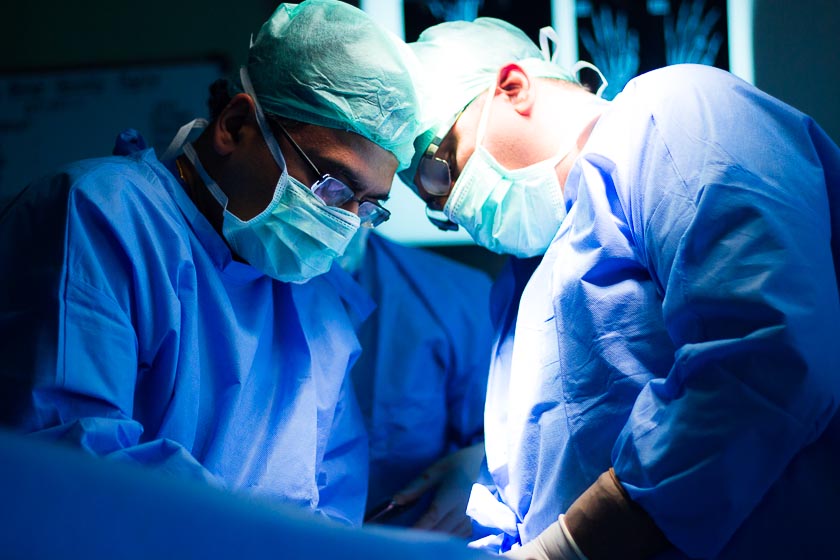 The orthopaedics routinely carries out some of the most advanced surgeries ranging from hip replacements to anterior cruciate ligament reconstruction. Our complex hand surgery and arthroscopic ligament reconstruction programmes are particularly well respected. Pre and post-operative care is given a high priority and our success rate speaks for itself.

When we think about orthopedics, bones and joints come to mind. But this field is so much more than just that and the includes ligaments, muscles, tendons and nerves too that together make up the musculoskeletal system. Trauma and degenerative diseases of the bones lead to a lot of pain which can only be treated and controlled by the expert hands of an experienced orthopedist.

The medical specialty called orthopedics is devoted to the diagnosis, treatment and rehabilitation of trauma and diseases of the musculoskeletal system. This system requires particular attention as the body begins to age and joints start to degenerate and become weaker and make it easier to fall and fracture or dislocate bones and joints.

Though it was only in 2007 that the 47-year-old Sita Bhateja Specialty Hospital became a multi-specialty hospital under the able guardianship of its Managing Director, Dr Arvind Bhateja, the orthopedics department has grown into a nationally and internationally recognized center for its excellence in innovative and successful surgeries.

At this hospital located in Bengaluru, Karnataka, patients from many parts of India as well as abroad come in for simple treatments as well as the most complex orthopedic issues. The hospital provides state-of-the-art care for joint replacements as well as musculoskeletal injuries and diseases. In keeping with the vision of the founder, each patient here is provided with the utmost compassionate care, warmth and courtesy as can be seen from the testimonials of various patients after leaving the care of the hospital.

The orthopedic surgeons at this center are recognized for their excellence and innovative abilities and the use of latest technologies to solve both simple and complicated orthopedic problems. These doctors are known for visiting various hospitals abroad frequently for the sole purpose of upgrading their own techniques and applying them in India on their patients. Use of these newer technologies helps in faster healing, better rehabilitation and better outcomes. Subspecialties within the orthopedic center include adult joint reconstruction, pediatric care, sports-related care, trauma care, hand, leg, shoulder, elbow, spine and orthopedic oncology.

Orthopedic Skills
The orthopedic surgeons at this hospital have expertise in the following areas including knee arthroscopy, shoulder arthroscopy, total knee replacement, hip replacement, complex hand surgery, brachial plexus surgery, arthroscopic ligament reconstruction to name a few. Though some of these procedures are highly complicated, they are performed with great skill on a routine basis by the doctors at this center. Hip replacement or anterior cruciate ligament reconstruction, the eminent surgeons are up to the task using the most advanced techniques and materials.

As in all global-standard hospitals, pre and post-operative care is given a lot of importance too. The doctors take their time to explain and educate their patients on the procedures they are supposed to undergo as well as the kind of results to be expected. Post-surgery physiotherapy and rehabilitation at the recently included Rehab Center are given a lot of importance as they are key to the outcome of any procedure’s success. The high number of happy patients is a testimony to the success of the surgeries carried out here.

A Success Story
A well-known feat at this hospital was on a 54-year-old housewife with a history of L4-5 spondylolisthesis (a forward displacement of the lumbar vertebral bone). Though she had undergone an earlier corrective surgery known as L4-5 PLIF (posterior lumbar inter-body fusion) four years before, her condition was worsening to the point that she was having severe back pain with associated walking difficulties. The doctors at this hospital deemed it necessary for her to undergo ‘revision’ surgery. This meant that the earlier L4-5 PLIF had to be completely revised which requires considerable experience and skill, and an additional level had to be added at her L3 vertebra.

The long surgery was a complete success and the patient was walking unaided just two days after the procedure!

The Tradition of “Giving Back’
Since 2013, the Sita Bhateja Specialty hospital at Richmond Circle, Bengaluru has taken the initiative of ‘Giving Back’ to the society. Aside from the Sri Jetha Nand Hospital for the Poor which provides free care to those who can’t afford it and offers treatments ranging from flu to free complex brain surgery with the same courtesy and respect given to other paying patients, the Sita Bhateja Speciality hospital also has a program where free spine surgeries are conducted on BPL card holders or those who are unable to afford it.

Till date more than a hundred free complicated spine surgeries have been carried out and the program is still going strong in its quest of giving back to the society, as per the wishes of the late Founder, Dr Sita Bhateja.

Team of Orthopedists
A group of highly qualified and experienced orthopedists run the show in this wing of the hospital giving equal doses of courtesy and compassion to their patients.

Dr Rudra Prasad is an orthopedic surgeon with more than 2 decades of experience under his belt from various major hospitals in India and abroad. His areas of interest include sports injury management, knee and shoulder arthroscopic procedures such as ligament reconstruction, stabilization and cuff repair as well as pediatric orthopedics. He also specializes in arthroscopic surgery on minor joints like the wrist, elbow and ankles.

Dr Bharath Kadadi’s experience is as long as the list of his awards, being a microvascular surgeon of international reputation. His main interest lies in upper limb trauma including hand injuries, brachial plexus injuries and disorders of the upper limbs including tumors, compression neuropathies, rheumatoid arthritis, spastic limbs, deformities and post traumatic late sequelae.

Dr B. S. Shankar has been a topper throughout his medical education and brings the same excellence to his work. He was part of the team that worked on victims of the Bombay riots and has extensive experience in trauma, fracture and joint surgeries, including knee and hip replacement.

Dr K. C. Satyaprakash is a highly experienced orthopedic surgeon considering the number of years he has spent working in reputable institutions. His focus is mainly on knee and hip replacement, knee and shoulder arthroscopy, traumatology, spine surgery and back care as well as sports medicine.

Dr S. Raghavendra is an excellent spine surgeon with a lot of international experience in pediatric and adult spine deformities. He is interested in degenerative spinal disorders of the lower back such as prolapsed discs and spinal deformities like scoliosis, kyphosis and spondylolisthesis.With such a formidable and experienced team ruling the orthopedic wing, patients can be sure of receiving the best possible medical care!